Capabilities for managing service innovation: towards a conceptual framework 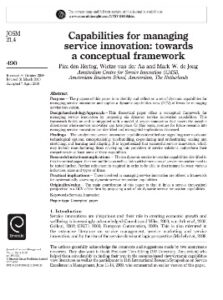 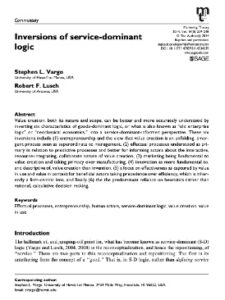 Posted on 3rd Apr 2021
Last Updated 8th Aug 2021
3/4/21  8/8/21
Research Paper
Abstract: Value creation, both its nature and scope, can be better and more accurately understood by inverting six characteristics of goods-dominant logic, or what is also known as ‘‘old enterprise logic’’ or ‘‘neoclassical economics,’’ into a service-dominant-informed perspective. These six inversions include (1) entrepreneurship and the view that value creation is an unfolding, emer- gent process seen as superordinate to management, (2) effectual processes understood as pri- mary in relation to predictive processes and better for informing actors about the interactive, resource-integrating, collaborate nature of value creation, (3) marketing being fundamental to value creation and taking primacy over manufacturing, (4) innovation as more fundamental to, and descriptive of, value creation than invention, (5) a focus on effectiveness as captured by value in use and value in context for beneficial actors taking precedence over efficiency, which is inher- ently a firm-centric lens, and finally (6) the the predominant reliance on heuristics rather than rational, calculative decision making.

Looks at various inversions that taking a service-dominant logic perspective has compared to the goods-dominant logic (which the authors also call ‘‘old enterprise logic’’ or ‘‘neoclassical economics”. These are: “entrepreneurship and the view that value creation is an unfolding, emergent process seen as superordinate to management, effectual processes understood as primary in relation to predictive processes […]
Reading time <1 min
Read Review

A theoretical approach to the construction of technological output indicators

The Elements of Value 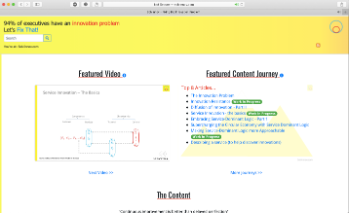 Posted on 6th Sep 2020
No updates made
6/9/20
Web Article
“Coming up with new concepts requires anticipating what else people might consider valuable.” “We have identified 30 “elements of value”—fundamental attributes in their most essential and discrete forms. These elements fall into four categories: functional, emotional, life changing, and social impact.” “For example, when someone says her bank is “convenient,” its value derives from some […]
Reading time <1 min
Read Details

Posted on 9th Aug 2020
Last Updated 8th Aug 2021
9/8/20  8/8/21
Research Paper
“IKEA is more than a link on a value chain. It is the center of a constellation of services, goods, and design.” “In essence, the [Danish] pharmacies wanted to broaden their traditional approach, delivery of conventional pharmaceutical “hardware” (in other words, selling drugs), into a concept they called Pharmaceutical Care, which would emphasize the “software” […]
Reading time <1 min
Read Review

The nature of technology: what it is and how it evolves 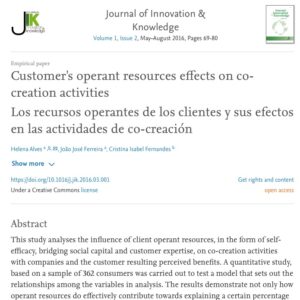 Posted on 29th Jul 2020
Last Updated 10th Jul 2021
29/7/20  10/7/21
Research Paper
Abstract: This study analyses the influence of client operant resources, in the form of self-efficacy, bridging social capital and customer expertise, on co-creation activities with companies and the customer resulting perceived benefits. A quantitative study, based on a sample of 362 consumers was carried out to test a model that sets out the relationships among the variables in analysis. The results demonstrate not only how operant resources do effectively contribute towards explaining a certain percentage of the variation in customer co-creation activities, but also how this resources influence gets boosted by the efforts companies make to educate their customers. The results also show that co-creation with the firm enhances customer perceived benefits.

On the service-centered dominant logic of marketing 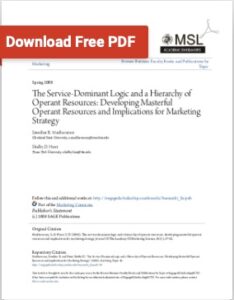 Posted on 20th Jul 2020
Last Updated 8th Aug 2021
20/7/20  8/8/21
Research Paper
Abstract: Marketing’s evolution toward a new dominant logic requires the focus of marketing to be on the intangible, dynamic, operant resources that are at the heart of competitive advantage and performance. First, building on resource-advantage theory's notion of basic resources and higher-order resources, this article proposes a hierarchy of basic, composite, and interconnected operant resources. Second, reviewing research on business strategy and marketing strategy, several resources that correspond to the proposed hierarchy are identified and discussed. Third, the notion of developing masterful operant resources is introduced. Fourth, based on the proposed hierarchy and the notion of masterful operant resources, some exemplars of potential research avenues for marketing strategy are provided. Finally, the article concludes with the discussion of implications for marketing practitioners, researchers and educators. In sum, this article extends and elaborates the concept of operant resources in the service-dominant logic of marketing.

Steps Toward a Science of Service Systems 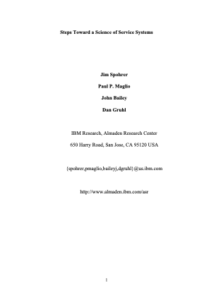 Posted on 14th Jul 2020
Last Updated 8th Aug 2021
14/7/20  8/8/21
Research Paper
Abstract: The service sector – which includes government, education, medical and healthcare, banking and insurance, consulting, information technology services, retail and wholesale, tourism and hospitality, entertainment, transportation and logistics, and legal among others – accounts for most of the world’s economic activity, but is the least studied and least understood part of the economy. Innovation in service in particular is not approached as systematically as innovation in agriculture and manufacturing, which have experienced large productivity and quality gains in the last two hundred years. To remedy this, we propose developing a science of service, which aims to provide theory and practice around service innovation. In this paper, we show progress toward this, arguing that the proper basic category is the service system in which entities exchange performance of beneficial action, and that a service system can be understood as a system composed of people and technologies that adaptively computes and adjusts to the changing value of knowledge in the system.