Welcome to what I am calling The Progress Economy. The way of viewing the world that accelerates growth and innovation.

We can view The Progress Economy as three levels sitting on a simple set of fundamentals.

Fundamentally, we observe that:

Above these fundamentals, we find three layers, describing:

Importantly, we observe that value is relates to how much progress is made (it is not signalled by price).

Price still has a role. It signals the number of service credits the Enterprise wants in return for integrating with its service mix. It is a measure of survivability. For the seeker, price represents how much service they need to give, usually elsewhere, in order to get the necessary service credits. It can be see as effort.

Seekers decide with service mix to integrate with based on potential value they see in the progress offered, the effort they need to put in to get service credits, and the effort to integrate. They may cease integration at any time they feel not enough progress is being made.

We see that value is co-created and done so during use (the integration of resources). It may also be co-destructed.

Progress offered may attempt to match that sought. It is sufficient to match functional, better to match functional and non-functional, and best to match those plus contextual. But it may also under or over offer. Over offering may be strategic positioning. Or maybe the seeker isn’t aware they are looking for that progress yet. Under offering may be a cost play, identifying which elements of progress the beneficiary doesn’t necessarily need. Or it may be aligning with the true definition of disruptive innovation.

The layered model opens up clear opportunities for innovation.

In attempting to address the innovation problem (and therefore fix the poor results we have with innovation today), I’ve identified one aspect we need to look differently at how value is created. That led me towards service-dominant logic, with its foundational premises shifting away from a value-in-exchange perspective (of what has subsequently become called good-dominant logic) to value-in-use and beneficiary determining value.

But this never sufficiently explained to me how things worked in a way that helped me systematically look for growth opportunities through innovation. Nor could I magic away the not insignificant role of price setting/cash.

Extrapolating tools, such as the service mix and service-service continuum helped. As well as identifying that service credits – a promise of future service – enable and mediate indirect service exchange. So price can be though of as a survivability aspect of the enterprise (ecosystem) – it needs a certain number of service credits to survive each integration (plus, often, profit). And price signals to the “beneficiary” not value, but effort they need to expend to get necessary service-credits to integrate with service mix they have chosen.

The true breakthrough came when seeing that actors were always seeking to make some progress, enterprises form to help make that progress, and ultimately, value relates to the amount of progress made. And hence The Progress Economy view was born.

The model is conveniently split into a set of fundamentals and three layers covering what is progress, how it is made, and who and how it is determined.

Innovation, which I’ll cover in a separate article, can come from any/all the levels. For example, offering better progress, altering the service mix, or reducing the effort the seeker perceives they need to perform to obtain service-credits (e.g. switching from up front costs, to, a monthly subscription model).

Fundamentally, we observe that all actors (person, group, enterprise, department..) are seeking to make progress in all aspects of their life.

the way of working is service based built on-top of service-dominant logic.
this world is inherently relational and feedback rules.

Level One – what is progress

Let’s call the actors seekers and the progress they seek: progress sought. Various enterprises/ecosystems form with the aim of offering to help seekers make progress in specific aspects. This we will call progress offered.

Where progress consists of three components:

And progress offered likely attempts to match progress sought. But validly may be over or under offered.

Importantly, we can now see that potential progress and progress made are measures of value.

Level Two – how is progress made

Enterprises provide acces to specialised skills and competences captured in a specific Service Mix of resources. Note that goods are seen as a distribution mechanism of service. And seekers attempt to make progress by integrating their resources (skills and competence) with a chosen service mix.

As resources integrate in an attempt to make progress, we say value is co-created and we get value-in-use. We also observe that value may be co-destructed, before, during, or after use.

A service-service continuum helps us understand what a particular servce mix means to a seeker. But we must be careful to understand that full service is not always “better” than self service. It depends on non-functional progress being sought.

A seeker chooses a service mix through evaluating a combination of

There is a fallback do-nothing option.

Since it is the seeker attempting to make progress, it is they who uniquely and phenominologically determine value (potential progress and progress made).

Relation to other economies

The traditional view of the economy, as per Adam Smith’s Wealth of Nations, is one that is based on goods and where services are not factors of growth. Such an economy is a restricted instance of The Progress Economy, where:

Shift to the progress economy

I’ve discussed whether there is really a shit from goods to service economy previously. And found that no, there is not, there is merely a shift in the skills and competence we are seeking. I can translate that as there is a shift along the service-service continuum, i.e. an alteration in the service mix. In reality it has always been and will be a service economy (as goods are seen as a distribution – temporal and location – mechanism for service provision).

Is there a shift from service (or goods) economy to the progress one? No. As we see above, both those economies are instances of the progress economy. 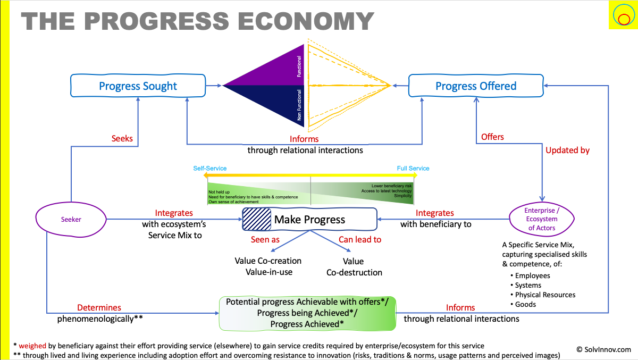