I’m sure you are familiar with the following Steve Jobs’ quote?

And we precisely see people as the source of strategic benefit in service-dominant logic. They can customise value propositions, improve co-creation and can attempt value co-recovery when co-destruction emerges. Whereas in our old goods-dominant logic we would see operand resources – goods, physical resources etc – as the source.

Going up the hierarchy of operant resources becomes harder to develop and acquire. But gives us greater strategic benefit.

We need to see the beneficiary as an operant resource too (it could be suggested they are partial employees (Bitner et al (1997)). And we need to use them correctly (and/or train them) so as to ensure co-creation rather than co-destruction of value.

It’s no wonder hosts of CEOs see their people and processes as strategic benefit. And sad for those that hope their goods are.

Does your strategic advantage come from the products you produce or the people that produce them? Traditional thinking would say it is the products. Better products (goods/service) – the output – give the advantage.

However, leaders of service-oriented organisations, are often quoted as saying their people are their advantage.

We built Starbucks brand first with our people, not with consumers. Because we believed the best way to meet and exceed the expectations of our customers was to hire and train great people, we invested in our employees

But is it true for goods-oriented companies? Well, Steve Jobs was very clear:

Apple’s view is not surprising. Recall that, in service-dominant logic, we see goods as simply freezing a service (the application of skills and competence) for distribution.

What we find is there are two types of resources. And one of them leads to strategic benefit. Let’s look at these resource types

There are two types of Resources

We see two types of resources: operand and operant. And it was Constantin & Lush who introduced these terms in their 1994 book “Understanding Resource Management: How to Deploy Your People, Products and Processes for Maximum Productivity“.

We’ll come to the definitions shortly. But first, look at this simple maths equation:

Here, the numbers – 1,2 and 3 – don’t do much on their own. It’s not that they have no value. They represent some notion of size and have a meaning. But what offers the real value are the operators, the addition (+) and the equals (=). They act on the numbers to do something.

And that’s really the difference between operand and operant resources. So now we can look at these in a little more detail.

The Tesla Model 3 is TopGear‘s number 1 electric car. And, Apple’s MacBook Pro 13 inch is PC Mag‘s editor’s choice in the ultra-portable category. Whereas The Ski Girl touts Rossignol as having the best cross country skis for 2020 across several categories.

In goods-dominant thinking all these examples have embedded value. These are goods – or what we will now call operand resources.

We need to perform an action on operand resources in order to lead to value.

As such, these operand resources are usually static and tangible. That really means we are thinking of goods, natural resources, those outputs of production, etc.

But there is the second type of resources: operant.

As well as access to static, tangible, resources (operand) we have access to resources that act upon other resources. These are operant resources.

I think the most obvious type of operant resources are your organisation’s people.

But there is a wider set of such resources. Operant resources are typically (Hunt 2004):

Operant resources are the fundamental source of strategic benefit

In goods-dominant logic we see goods as being the strategic advantage. The better car, the better icecream, the better washing machine etc. The focus goes back to maximising embedded value and exchanging it at the point of sale.

However, in service-dominant logic, we look at things differently. First we start with a service-first view point. And service is the application of skills and competencies (for the benefit of a party). Therefore the better the skills and competencies, the greater the value that can be proposed and realised (through co-creation).

And we know that the value proposed can most likely be improved by customisation. Something that an operant resource can’t do – it requires an operand resource. Further, if value co-destruction starts to occur, then only the dynamic operand resources can attempt value co-recovery.

By definition then, we need can only see operant resources as being a fundamental source of strategic benefit.

Vargo & Lush (2016) made the choice to use the phrase “strategic benefit” rather than “advantage”. They did so to emphasise the service-service nature of our world. And to move competitiveness to a secondary motivator, in favour of the co-creation of value is primary. As they say:

…the realization that there is competition in the process of one actor benefiting itself through service provision to other actors, while critical, is not primary. It also points the service provider in the wrong direction, toward the competitor and thus away from the potential service beneficiary.

A Hierarchy of Operant Resources

Madhavaram and Hunt (2008) identified the hierarchy of operant resources you can see in Figure 2 – basic, composite and interconnected.

Firstly, basic operant resources (BOR) are those that an enterprise can readily get its hands on. The type of resources that allow it to efficiently and effectively operate. They are easily acquired, easily measured. But they are not great at sustaining a competitive advantage on their own.

Next up in the hierarchy are the composite operant resources (CORs).

Since these CORs are more complex they are seen as harder to obtain and/or develop. And require a bit more commitment from the enterprise. But the would be expected to result in more sustained competitive benefit.

And finally, there are the Interconnected operant resources (IORs). Two examples, from the 7 identified are in Figure 4.

As you go up the hierarchy it becomes harder to acquire and develop the operant resource. But you also gain increasing levels of sustainability and strategic benefit.

These IORs are the most complex. And fittingly they are the hardest ti acquire/develop, hardest to measure. But give the greatest strategic benefit.

Which loops us back now to the foundational premises of service-dominant logic: operant resources are the fundamental source of strategic benefit.

There’s one last thing not to forget – the beneficiary also has operant resources.

The Beneficiary has Operant Resources too

Let’s not forget that the beneficiary of the service also is and has operant resources.

For example, in an Agile software development service, the IT team is providing development skills and competencies. And the business is providing product owner skills (to prioritise which functionality is most important to develop). If the beneficiary operant resources are poor, then value co-creation will be difficult to achieve.

Alves, Ferriera and Fernandes (2016) highlight previous studies that identify “Operant resources held by each individual may be:

Interestingly, Alves, Ferreira and Fernandes (2016) also looked at customer operant resources in the context of the perceived benefit of co-creation. Figure 5 shows the set up they considered.

And they found high correlations in all of their study’s hypotheses:

One thing we can take away from their results is that educating the customer’s operant resources increases the potential for co-creation of value.

Typically operand resources are goods. And operant resources are thought of as people. Though they can be codifications of skills and competencies. For example in controls, routines and processes. These operant resources are also wider, such as market orientation, alliance competence, entrepreneurial proclivity and more. And they exist in a hierarchy of basic, composite and interconnected resources. Where going up the hierarchy is harder to develop. Yet gives a better strategic benefit. 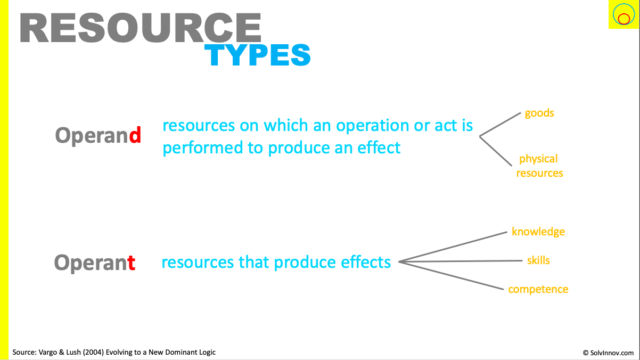