It’s time to revisit and update den Hertog’s 20-year-old services innovation model. That model says a service innovation is a change in some combination of dimensions (concept, client interface, delivery system and technology) and/or capabilities between those dimensions (HR, organisational, and marketing & distribution).

But our modern world reveals a heavier reliance on technology, data, and ecosystems. And reflects a service-dominant logic view – which underpin recent theories, such as Christensen’s job-to-be-done theory and Kim & Mauborgne’s Blue Ocean Strategy.

Our dimensions are enhanced to include technology as well as ecosystem and data.

And our set of capabilities are enhanced to include technology, partnership and data exploitation capabilities.

Such an enhanced model just reflects aspects that are important today in service, that perhaps were not so visible in the age of the original paper.

We can still systematically hunt for innovations and determine execution complexity for an innovation. Which in turn supports us engineering down complexity, justifying investments or managing innovation portfolios.

We observe that den Hertog’s model can be extended without breaking the underlying intent, nor the activities that I’ve identified we can perform with it. There are potentially other dimensions and capabilities that could be added, based on domain and focus of your own industry/needs.

Den Hertog’s model, published in 2000, allows us to see, describe, and explore service innovation. Which he defines as some combination of changes in dimensions and capabilities.

Yet the world has moved on since 2000. To one where we can say that “Service is eating the world“. Where technology, ecosystems, and exploitation of data are more deeply involved in service than was perhaps visible back then.

We find value needs to be defined differently, and that service-dominant logic emerges as a useful way to view the world when looking for growth. And where minimising innovation resistance is essential (though often forgotten).

As such, we should revisit den Hertog’s model to see if there are updates that can help us. And I propose there are, grouped around three topics:

Additionally, we can begin to map where modern theories, such as Christensen’s job-to-be-done theory and Kim & Mauborgne’s Blue Ocean Strategy impact the model.

These lead us to the enhanced model you can see in Figure 1.

But before we jump into exploring my proposed updates, let’s quickly remind ourselves of den Hertog’s original model.

I explore den Hertog’s 4-dimension services innovation model over in this article. But, let’s quickly recap it here, as shown in Figure 2. Where, in short, we can say a service innovation occurs as a change in one or more of 4 dimensions:

And/or in the enterprise’s capabilities of:

For example, a new service concept might draw on re-organising the back office and how the client reaches and interacts. That requires organisational and marketing/distribution capabilities.

Finally, the model includes various comparisons linked to each dimension. These compare each dimension with the existing situation. Such as comparing the new service concept to the characteristics of existing and competing services. These will be interesting later when we talk about where Blue Ocean strategy fits in.

Now let’s look at my proposed enhancements. And we’ll start with uplifting technology. Though just before we do, let’s rearrange den Hertog’s model slightly, only so that we make space for our additions.

And so onto the proposed enhancements.

Den Hertog placed technology in the centre of his model. With the other three dimensions linking to it. And that makes perfect sense as we know innovation can be driven by technology advances that become available (tech-push innovations) or that we specifically search for (demand-driven).

In our current world, with apologies to Horowitz’s view that “software is eating the world”, it . And service is more and more powered by software (technology). For example, AI, robots, chatbots, blockchain, online/mobile/apps, business agility, etc.

den Hertog included a 4th dimension of technology I promote it to be an encompassing/enabling dimension. Both for the other dimensions and for the model’s capabilities. As you can see in Figure 4.

And with this encompassing dimension comes capabilities.

It’s not entirely clear to me that den Hertog had technology capability of the enterprise to mind in the original model. But to me, this is something that is important. The better your relevant tech capabilities are, the easier it should be to execute innovations. Imagine you decide to implement an innovation based on blockchain or machine learning. To successfully do so, your organisation needs access to the tech skills involved.

Of course, those tech capabilities could be in-house (make), hired in (buy), or come from a networked partner (align).

Another increasingly important dimension in service innovation is the exploitation of data.

Some say data is the new oil (though some argue it is not). I think it is hard to not see data as important. It drives deep learning, artificial intelligence, recommendation engines etc. All of these require vast amounts of data to be useful You can use data for setting operational and strategic directions. And usefully to see the impact of your innovations (A/B testing etc).

So, I introduce Data as a specific dimension. And I link this new data dimension to the other three main dimensions. Since we can innovate in all 3 dimensions through exploiting data. Finally, I place this dimension within the overall uplifted technology dimension. As technology advances, so does our ability to exploit data.

Along with having data as a dimension, I introduce the need for data exploitation capabilities. These are your enterprise’s skills in acquiring, exploiting and understanding data. Your systems, strategists, data scientists, AI/machine learning engineers, etc.

You can acquire data from your own customer interactions. Alternatively, you can buy data sets (in some cases, there are datasets available for free). Or, you can ally with partners to get access to their data for the length of the alliance. Similarly you can do so with the capabilities you need.

This brings us nicely on to the topic of ecosystems.

We know that service is the co-ordination of resources for the benefit of an entity. And, traditionally, a “service provider” would own most of those resources.

But we see from service-dominant logic that resources are owned by all actors involved in the service, including the beneficiary. And we observe that service is increasingly ecosystem-based. That is to say, more than two actors – beneficiary and provider – being involved. Just as a simple example, take online shopping. There is a web-site provider (the client interface), a distributor and deliverer to end customer, a payments processor etc. And these might all be different actors co-ordinating together in an ecosystem.

This is well known in economics as transactional costs economics. Where you want to minimise the potential for “hold-ups”. But we could perhaps enhance a little in our service mindset to talk about perception. Customers tend to link the whole chain together. When they buy something from Amazon, they see any delivery problems as Amazon’s problem.

This is why Amazon, for example, looks to extend their service vertically to deliver themselves. This aims to remove the potential for delivery companies to hold Amazon to ransom. But equally allows Amazon to give better customer experience.

I, therefore, as did den Hertog in his later 6-dimension model, include partnerships and alliances (under the heading Ecosystem) as a dimension. And, similar to the technology dimension, I see this as an all-encompassing dimension (see Figure 6).

Along with this new dimension come some new capabilities. This time it is the capabilities your organisation has relating to identifying, evaluating, forming and maintaining partnerships and alliances.

Beyond these updates, it is useful to understand where my new definition of innovation fits in – where we help beneficiaries make progress.

Innovation, according to my definition, helps “beneficiaries make progress” in a manner” better to which they can now”. This reflects both Christensen’s Job to be done theory as well as resolving hindrances (which means doing a job better than something else, including nothing).

If your innovation does neither of those, then, sorry to say, what is the point of it? It is never going to help the customer (the beneficiary). So we need to always keep this in our minds when looking for and explaining innovations.

We can also see where Blue Ocean strategy fits into our picture.

Blue Ocean Strategy’s strategy canvas is a useful tool for us to find service innovations. It essentialy helps us perform the dimension comparisons that den Hertog talks of.

On the strategy canvas, we use the x-axis to list industry characteristics. And on the y-axis, we plot the relative strengths of our competitors plus ourselves. For our example, we might identify it looks like Figure 8.

You’ll notice that Snap (in yellow) has quite a different profile to Facebook and Instagram. Some aspects, such as “use in the moment” are raised; others such as “ease of use” are lowered. There are even aspects that Snap eliminates – such as “view past content”. And we could find some characteristics to create. Just having a difference is not the point, the point is it is these differences that were driving Snaps growth – teenagers loved the fact it was hard to use (friends found new features and spread as word of mouth) and that past content was not viewable (no pressure to perform).

The link to our model comes from remembering den Hertog’s model had comparisons as well as considering Gallouj & Weinstein (1997) work. This later work views as a set of characteristics, which I look at in “A model for describing a service and better still systematically discovering service innovations“).

And we can loosely think of a new service concept, new client interface and new delivery systems as comprising most of those characteristics. Therefore, we can draw these characteristics on the Blue Ocean strategy canvas. And from there apply Blue Ocean’s Four Action Framework (raise, lower, eliminate, create) to explore for innovations.

But, we nearly always forget about innovation resistance. And we should not.

We often forget (or don’t even realise we need to address) innovation resistance. There are three types of innovation resistance: postponement, rejection and opposition. And they are driven by the adopters’ perceived physical, economic, functional, and social risks. As well as the innovation challenging traditions & norms, usage patterns or perceived image. This is summarised in Figure 9. nd detailed in my article “Innovation Resistance“.

Den Hertog’s 4-dimension model from 2000 is a perfectly serviceable model for service innovations. However, in the 19+ years since publishing, the world has changed and some updates only add to its usability.

We added a new dimension (data) and promoted an existing one (technology). This reflects the technology/data-driven world we find ourselves in. We also introduced the need to describe what the business does in a non-myopic way. Doing so helps us spot the growth opportunities that are needed for innovation and which innovation can drive. Finally, we recognise that partners/alliances are key to service delivery. However, we keep them as part of the “new delivery system” rather than create a new dimension.

Last, but not least, I showed where blue ocean strategy, job to be done theory (as well as hindrance maps) blend into the thinking. And that we need to address innovation resistance both with the beneficiaries (which often means customer and organisations staff).

The extended model is highly versatile and we can use it to gain several benefits, such as: 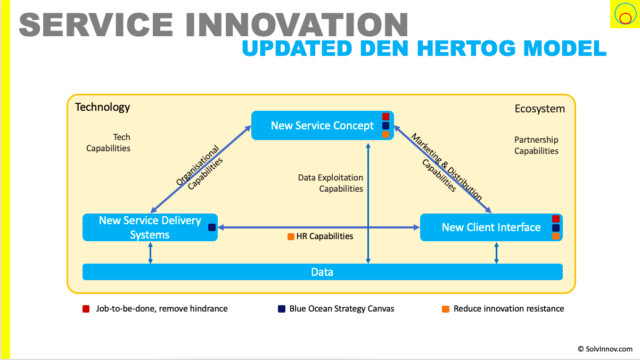